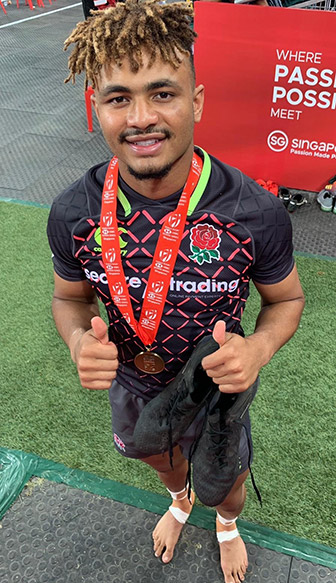 Recent leaver Femi Sofolarin made his World Series 7’s debut for England in Singapore over the Easter break. Femi has been training full time with the England 7’s squad this year, and after appearing for an invitational team at the Hong Kong 10’s the previous weekend, Femi was called upon by England 7’s coach Simon Amor to make his World Series debut. Femi scored in the opening group game versus Kenya, with England qualifying for the Cup competition on Day 2. England defeated Australia in the Quarter-Final’s, before moving on to face Fiji in the semi-final. Unfortunately Fiji progressed to the final after an intense and close fought encounter, with England facing the USA in the bronze medal play off. England went on to win the match, and equal their best position in this years World Series. Huge congratulations to Femi; he now moves on to helping England prepare for the London and Paris legs of the World Series tournament, with teams looking to qualify for the 2020 Olympic Games. 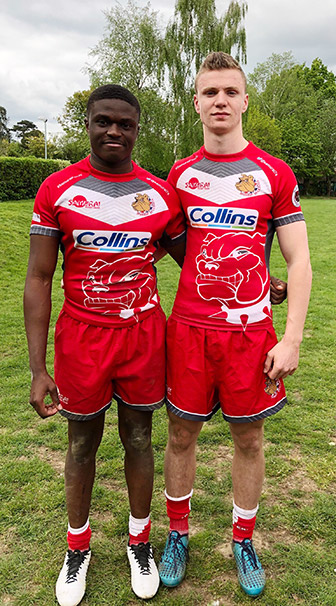 We also congratulate current students Max Bliss and Oludara Odunlami (pictured) who trialled for England Academy 7’s over the Easter holiday. Sunbsequently they were selected to play for Samurai/England Development teams at the East Grinstead Sunshine 7’s and the Bury St Edmunds 7’s.

After reaching the final of the Rosslyn Park 7’s, this year’s 1st VII also have a wonderful opportunity to replay the final versus Sedbregh, during the London World Series 7’s held at Twickenham. The teams will play on Sunday 26 May before the final round of matches; a great opportunity and what will no doubt be a wonderful experience for the team.