Terry was very much a Hampshire man. He was born in Lymington and educated as a boarder at Churcher’s College, Petersfield where his selection as School Captain provided an early recognition of his leadership qualities.

Terry did his National Service in the Royal Hampshire Regiment which certainly equipped him with the skills he later put to good use as an officer of the CCF (54-64) and then Commanding Officer (64-78) at Dulwich. He went to Southampton University where he read History followed by a Certificate in Education.

While at school he was in the Cricket 1st XI for four years and took a total of 264 wickets. At university he went on to play for the English Universities (UAU) side. His unusual bowling action, like a windmill, was renowned at Dulwich when he was master in charge of the Cricket 2nd XI (55-63).

After spending a year teaching at his old school, Terry joined the teaching staff at Dulwich College in 1954 to teach Latin and History, a modest start to what was to become a long and most distinguished career in SE21. During his 35 years of teaching, he was also master in charge of the Colts Rugby (56 – 67), and boarding housemaster of the Orchard (68–78), where he was ably supported by his wife Patricia whom he married in 1958. Their children, Victoria and Edward, grew up in the House. Victoria went to at school at JAGS while Edward joined the College in 1973. Terry was also Head of the Lower School (69-78) and, for the last eleven years of his time on the staff, he was Deputy Master (78-89).

In 1989 he became both Secretary of the Alleyn Club, a post he held until 2002, and Director of the Bursary Appeal (89 -03) helping to raise some £2.6m. At the centre of everything he did was his deep affection for young people. Using his phenomenal memory and almost encyclopaedic knowledge of the College, he would go to great lengths to help both young Alleynians and Old Alleynians with introductions to useful contacts.

Terry was President of the Alleyn Club in 2002 and on many occasions commented what a tremendous honour it had been to be only the second non Old Alleynian to be President since 1873. In 2003 Terry was made Senior Fellow of Dulwich College and at the time of his death continued to put to good use his knowledge of the College, while working in the College archives.

A Service of Thanksgiving was held on 2 May 2019. The service was captured on film, which you can view here. 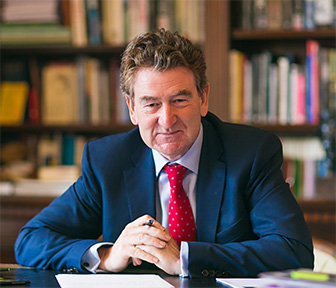