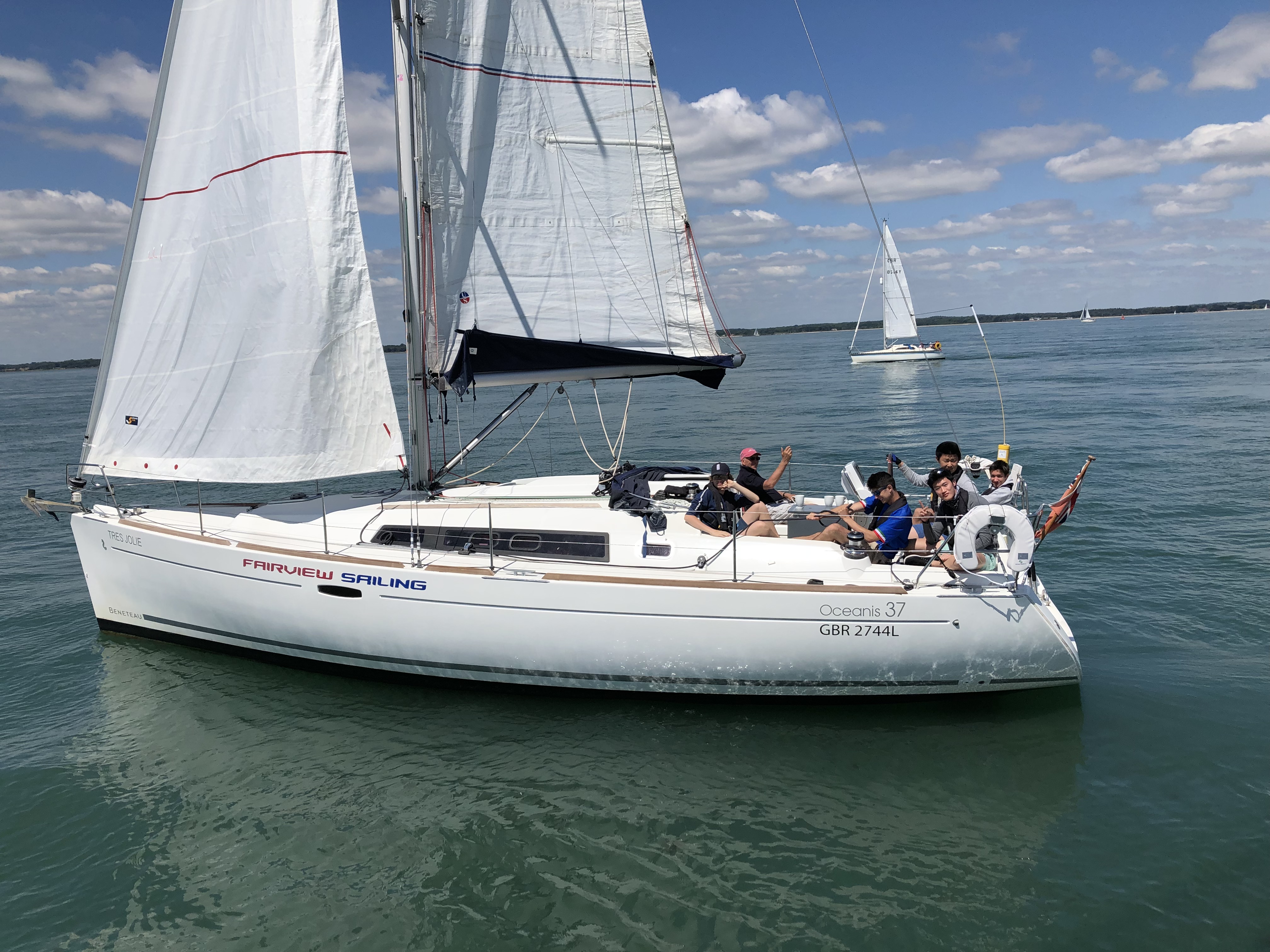 The Alleynian Sailing Society was at least 35 years old this year so it was with a sense of occasion that we embarked on the Boys’ Sail Training Week on the 14th July. Boys are offered the chance to join a small fleet of sailing yachts, exploring The Solent and learning the ropes along the way.

We entertained a slightly reduced number this year as the trip was not offered to year 8, but nonetheless, 18 Alleynians found their way to the Hamble River and the 4 Oceanis 37 charter boats, each skippered by OAs. Once again we were joined by the Barnwells’ excellent Malo 37 sailing yacht, Ruby. The trip has a very high retention rate and we were delighted to see so many familiar
faces. Once the assembled crew were on board and briefed, we all set off in the evening sun for a relaxed run to Cowes under foresail.

Monday morning gave us blue skies and light north easterly winds, perfect for man overboard training in Osbourne Bay. Those who had previous experience made this a very slick operation and it was good to see that the routine had not been forgotten. The rising temperature gave us sun bathing weather and we embarked on a long and leisurely run down the West Solent with a following tide and plenty of sun cream. Destination, The Needles, surely the most recognisable landmark on the UK coastline. It is a must-see for anyone interested in sailing, especially if you can get to it by boat. The wind picked up as we crossed Alum Bay and this gave the newcomers their first experience of how it feels to have a yacht heeled over under full sail. With such favourable weather, we managed to get extremely close to the light house, allowing us to appreciate the full scale of this famous icon sitting upon its magnificent chalky outcrop.

We spent a quiet Monday night in Yarmouth Harbour before leaving early on Tuesday to catch the flood tide back towards Portsmouth. Boats stopped off at Stokes Bay and Osbourne Bay for lunch. Some hardy sailors even went swimming. We arrived at Ruby’s home port, Haslar Marina, in time to visit the Royal Navy Submarine Museum in Gosport. Many spent the afternoon ducking in and out of the confined spaces of the main attraction, HMS Alliance, the only remaining WW2 era submarine.

Wednesday kicked off with marina mooring practice for some while others set off to sail past the Napoleonic Forts at the Spit Sand, Horse Sand, No Man’s and St Helen’s, collectively marking the gateway to The Eastern Solent. As a precursor to the more competitive challenge later in the week, the fleet took full advantage of a breeze filling in from the west to leave in formation and beat up to the entrance of the Beaulieu River. With a staggered start, this was our first fleet challenge, allowing the boys to test out their fast tacking skills while keeping a watchful eye on the competition. After some enthusiastic ducking and diving, boats arrived at Beaulieu in the same order as they left and moored up at Buckler’s Hard in anticipation of the annual barbecue hosted by Dr Alex Langley. This is always a highlight of the week and in honour of the quatercentenary year we were joined by Edward Alleyn, or at least a life sized cardboard cut out of him, adding his distinguished presence to the group photos.

Next morning, we assembled just off the river entrance to embark on the Navigational Challenge. Ruby acted as committee boat and the outer mark of the start line while hoisting the ASS battle flag for our start sequence. Anthony Frankford in Avant Guard and Richard Sainsbury in Tres Jolie set the tone with some exciting close quarter manoeuvres on the start line and we were off. With the
commodore in Fleur de Lis closing fast, there was a real battle to the first mark. The crews really showed off their skill this year with some of the best and closest tactical sailing we have seen for a while. The cat and mouse chase ended with Fleur de Lis clearing the line with Avant Guard in hot pursuit. The battle for third was even closer with Reg Kheraj in Apres le Vent and Tres Jolie neck and neck, Apres le Vent just making it by a bowsprit. Richard Sainsbury then set a second timed course to take us home to Cowes, which not only kept the enthusiasm going but was an immediate lesson in how to play the strong ebb tide. With a hilarious side by side run up to Prince Consort, we threaded our way though the Panerai Classic fleet with Avant Guard making the distance to Royal
London and the end of a perfect day’s sailing.

This was my 3rd and final BSTW as commodore and my thanks go out to all who have made my tour an extremely pleasurable experience. The Hon Sec Anthony Frankford, Nigel and Isobel Barnwell, skippers Richard Sainsbury and Reg Kheraj, mates Harry Tinker, RIchard Byford, Peter Fosdike and Alex Langley, second mates Ben Taffs and Chris Law and the master in charge, Harry
Willetts. Final thanks as ever to the Friends of Dulwich and the Alleyn Club for their enduring financial support.

See pictures from the week here.

If you are interested in finding out more about the Alleynian Sailing Society please contact Anthony Frankford.